skip to main | skip to sidebar

Like many I found myself sitting and watching the fires ravage this beautiful state of ours.
I cried as I saw houses burn to the ground and as the death toll rose.
Never in my 33 years of life had I been so touched by the images I saw appearing around me. I saw men and women selflessly put their life in danger to save the lives and properties of others and I felt helpless. I saw people walking circles shocked by the experiences that had stolen a part of their life so suddenly and I felt useless. Helpless and useless I sat wanting to play my part in helping those who had lost so much or to thank those who had done so much.
For many their hands were tired. They had the will, but not a skill and were left feeling frustrated that donating money was just not enough.
One year ago I finished my training as a remedial massage therapist. Today I am ever so grateful for that. I am able to offer a skill to people in need. To people whose bodies were crumbling under them from sheer exhaustion.
Sunday I was placed at the Healesville Staging Area. Most of the people attending that area are CFA, DSE and Melbourne Water staff who have been battling to keep their beautiful town safe for days on end. Supported by CFA from Victoria at large and  NSW, the good people of Healesville have sat on guard since shortly after the fires began. Exhausted and weary; one by one emergency service workers began to appear at the door of our make shift 'massage clinic'. Smelling of smoke and covered in ash and dirt they were more than happy to find a table to lay on and have their over worked muscles massaged. Seven of us that day manned massage tables and chairs and still we had to turn worthy people away. I only wish we'd had more hands on deck to offer more massages to more people. They deserved every bit of sweat we shed in that hot converted football change room.
As a bright red sun amidst a smoke filled sky set over the hills of the Yarra Valley and even until this moment the thing that overwhelms me most about my experience in Healesville was the gratitude from those people whom we were massaging to thank for what they were doing. Offering us gifts of chocolates and wanting to donate or pay for our services, they didn't even realise that we were there to pay them a debt of gratitude for the hard work they were doing. It's a shame that it's times like this that it shows most, but it's amazing and humbling to see the Australian spirit that pays not a second thought to helping out a mate.
Reflection by Leo - Remedial Massage Therapist 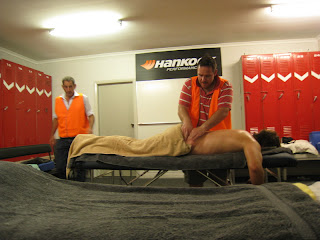 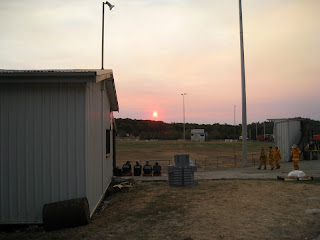 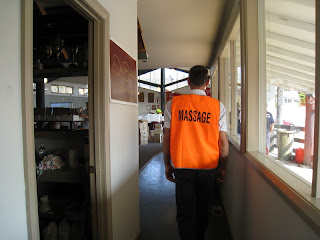 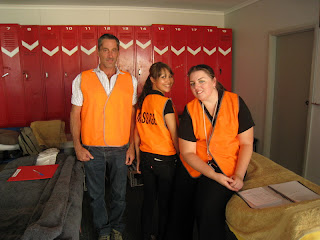 Posted by United Therapists & Hands on Health at 11:25 pm

United Therapists & Hands on Health
Are you a therapist wanting to volunteer at a relief site? If you are able to offer immediate assistance, then please telephone our registration hotline on 0402 733 443. Otherwise, please email us at unitedtherapists@gmail.com